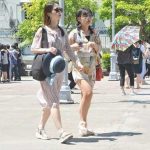 International arrivals in Danang surge by 50%

DANANG – Danang’s Department of Tourism on June 26 announced that in the year to date, international arrivals to the central coastal city of Danang had rocketed by some 50% year-on-year to an estimated 1.6 million out of over four million tourists to the city.

Tran Chi Cuong, deputy director of the department, said that although accurate data had yet to be gathered on international tourists to Danang in the first half of the year, South Korean visitors have accounted for half, skyrocketing by 100% year-on-year, while the number of Chinese travelers have reached 368,000, up 36% and representing 23% of the total.

In recent years, Danang has seen a large influx of South Korean and Chinese tourists, achieving substantial revenue from tourism services, Cuong said. But he voiced concerns over the rampant development of low-cost tour operations, saying it had left negative impact on the tourism environment, service quality and tourists’ rights and benefits.

“We sent a report on proposals to tighten and control low-cost tours,” Cuong told the Daily, adding that focusing on Europe and India as major source markets is a necessary solution.

Besides this, airlines, travel firms and authorities at Danang International Airport should map out a general plan to launch air routes to new source markets, Cuong stressed.

Statistics show that in the first six months of 2018, the number of tourists traveling by air to Danang surged by over 40% against the year-ago period to an estimated one million. The city welcomed 62 cruise ships docking at Tien Sa port, with some 65,000 guests, up 23% year-on-year. 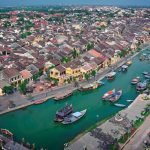 Vietnam’s Hoi An a top draw for solo travel

Vietnamese ancient town is among three Asian cities in the list, alongside Gyeongju and Thimphu.

The popularity of Hoi An, which has been a top tourist destination in Vietnam for decades now, continues go grow.

It’s latest accolade and landmark achievement is making it to second place on the list of 10 safest and most exciting places on this earth for solo travelers compiled by travel editors at Momondo, a U.K. based travel site.

The travel search site finds and compares the best offers on flights, hotels, car hire and package holidays for travelers.

Unlike Ho Chi Minh and Hanoi, the two biggest cities in Vietnam that are flooded with waves of noisy vehicles and modern skyscrapers, Hoi An casts a spell over backpackers for its tranquility and slow pace of life, the site said.

“Motorbikes are banned in the town center, so take a stroll past the yellow houses with their old red-tiled roofs and admire the street-side cafes and picturesque historical homes lining canals and winding alleyways,” the site gushes.

It’s best to cycle to the pristine beach An Bang, which is just around three kilometers away from the ancient town center, Momondo says.

The beach, which is home to fishing villages and provides a romantic setting for couples, is best enjoyed between May and September and has been raved about by leading global travel magazines.

For many, Hoi An is not just a collection of 16th century houses for which the former port city has been recognized by UNESCO as a World Heritage site. A cuisine particular to the ancient town, influenced by many different cultures including Japan, China and Portugal, is a major part of its attraction, too.

The U.K. travel site also reminds its readers not to leave Hoi An without trying a bowl of signature cao lau (brown noodles with pork and greens) that can only be found there.

Gyeongju in South Korea and Thimphu in Bhutan are two other Asian cities that have made it to the list, which is topped by Bordeaux, the kingdom of wine, in France.

Other cities in the list are Ghent in Belgium, Split in Croatia, Banos in Ecuador, Florianopolis in Brazil, Dublin in Ireland, Havana in Cuba and Toronto in Canada.

Another U.K. based travel publisher, Rough Guides, earlier this year included Hoi An in the top 10 destinations in Southeast Asia while the New York-based Travel + Leisure’s readers last year voted it as one of the 15 best destinations in the world. Many businesses operating in accommodation services in Da Nang have made great efforts to enhance their service quality, as the high-end accommodation segment is growing and investment in the segment projected to continue to rise in coming time.

Many accommodation establishments of three- to five-star are being built in the city, creating a foundation for development of middle- and high-end tourism.

Major projects under construction include the Ariyana Beach Resort and Suites Da Nang, JW Marriot, Hilton Bach Dang, My Khe Duc Long, Four Points by Sheraton, Golden Bay and Hai An, among others.

According to the municipal Tourism Department, domestic and foreign investment has been strongly poured into tourism services, especially in high-end tourism products. In addition to infrastructure, investors also paid attention to human resources development.

The number of holidaymakers in this segment has been on the rise, bringing big revenues for local hotels and resorts.

Viet Nam has witnessed an influx of international hotel brands and hotel management companies in the last few years, according to property consultant Savills Viet Nam.

From 30 hotels with international brand names in 2010, the number had increased to 79 at the end of last year. The strong growth of the tourism sector has also given a boost to the hospitality industry.

Da Nang is a popular tourist destination in Central Viet Nam. The online marketplace and hospitality service Airbnb announced a list of the world’s top 10 destinations for the 2018, in which Da Nang ranked fifth in booking surges of up to 255%.

According to the Da Nang Department of Tourism, the number of visitors to the central coastal city is increasing with annual average growth of 20.06% in the 2013-2017 period.

The city was ranked second in the list of the 10 most popular destinations among solo or couple travelers in 2018, according to the Republic of Korea’s Ticket Monster Inc.

The website said people who plan to travel abroad with family members chose Da Nang as the most popular destination.

The city is also the second-most popular destination among couple of travellers, followed by Bangkok (Thailand) and Guam (the US), it said.

According to the Viet Nam National Administration of Tourism, Da Nang was said to be the best place to live in Viet Nam with many world-recognised records. It is famous for My Khe Beach, one of the six most attractive beaches on the planet selected by the US’s Forbes Magazine in 2013, the cable line to Ba Na Hills at an altitude of 1,487 metres, and Sun Wheel, which is 115 metres in height and situated in Asian Park, Hai Chau district.

Besides, Da Nang International Airport was ranked third among the best airports in the world in 2014, according to a survey by Dragon Air. 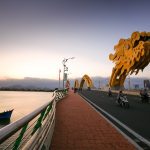 South Koreans, one of the biggest contingents of foreign tourists to Vietnam, are heavily favoring Da Nang City as a summer destination this year, according to the Ticket Monster website.

Ticket Monster Inc., one of the largest travel booking sites in South Korea, has named the central coastal city among top 10 places of choice by families and couples this summer based on the number of bookings in the next two months, said Seoul’s Yonhap news agency.

Da Nang, home to Asia’s most beautiful My Khe Beach and a neighbor to the popular ancient town Hoi An, came in second on the list, followed by Tokyo, Bangkok and the U.S. territory of Guam. The Japanese city of Osaka topped the list compiled by the website.

South Koreans are expected to surpass Chinese tourists and become the biggest group of visitors to Da Nang in the near future.

Vietnam’s third largest city has welcomed 538,000 South Korean tourists so far this year, accounting for a third of total foreign arrivals in the city, according to the municipal tourism department.

As many as eight airlines are operating services between Da Nang and South Korea, with a frequency of 84 flights every week. 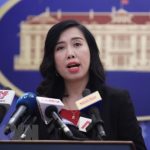 The Asian-Pacific countries’ nomination of Viet Nam as the only candidate of the region for a non-permanent seat at the United Nations Security Council (UNSC) for the 2020-2021 tenure reflects their high support for and trust in the country’s role and capacity, said Spokesperson of the Foreign Ministry Le Thi Thu Hang.